I can’t even call them mega-updates if they only happen every half a year. But at least they are content filled. Rest assured, dear reader, that I have every intention of posting more, but I’ve had that same intention for more than a decade. Oh well: progress not perfection, right? 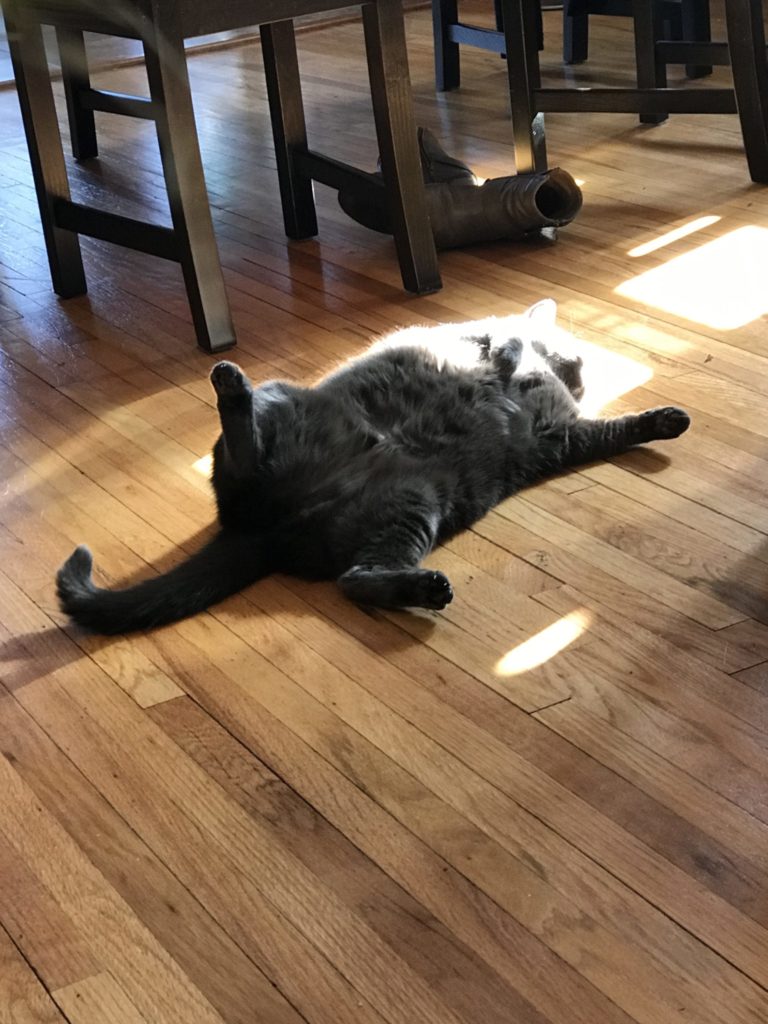 For the record, that image was taken Feb. 17th 2017, so I have no idea what that thing is on my floor. Boxing glove? Portable urinal? Probably-shipping-material-from-an-e-retailer? It’s lost to the history books.

End of March, I traveled to Salt Lake City for a business conference (Domopalooza, if you’re curious). It was pretty crazy. Great concerts, open bar, and semi-interesting business stuff. Why do I mention it? Because I came prepared. 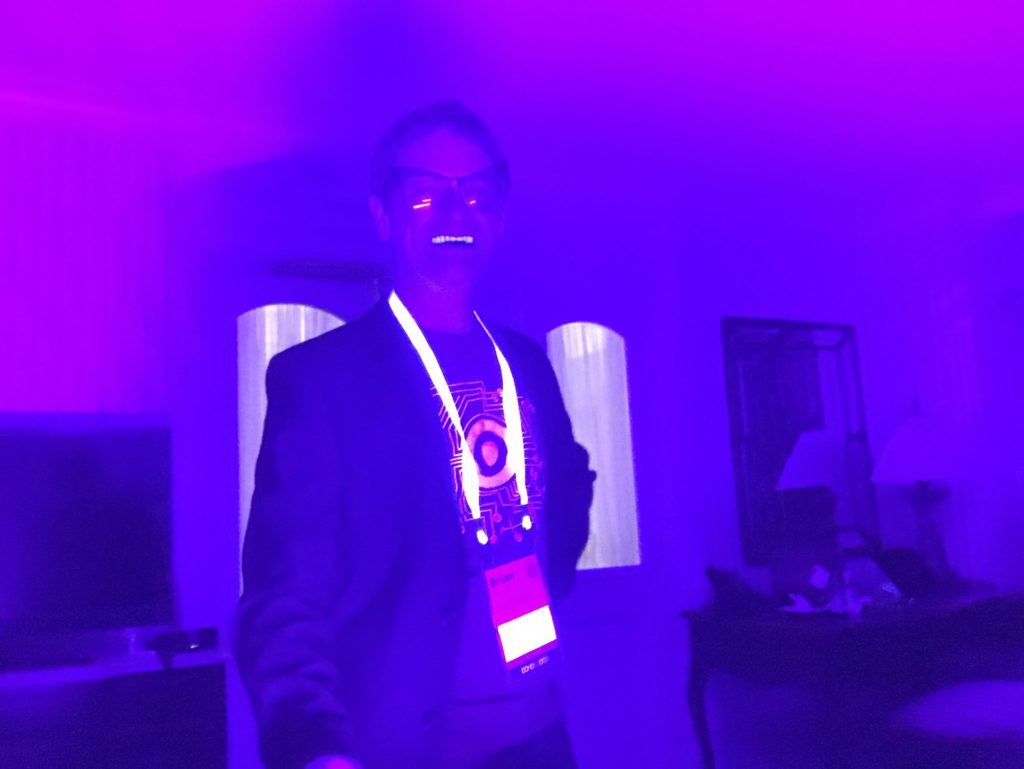 I brought a black light for my hotel room. 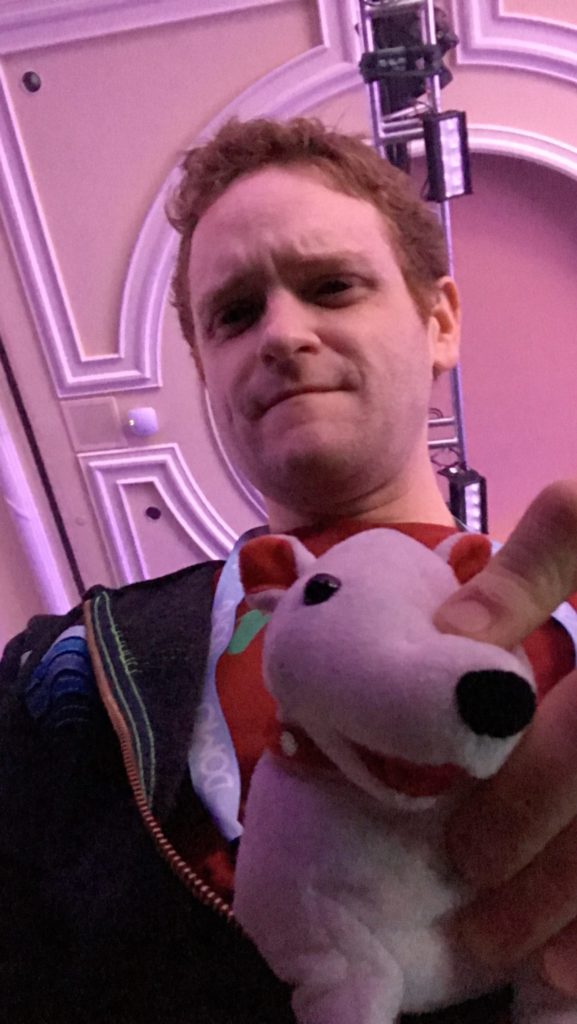 I brought Bullseye for the dance floor (which, I should note, was my own decision and does not reflect the views or opinions of Target Corp). 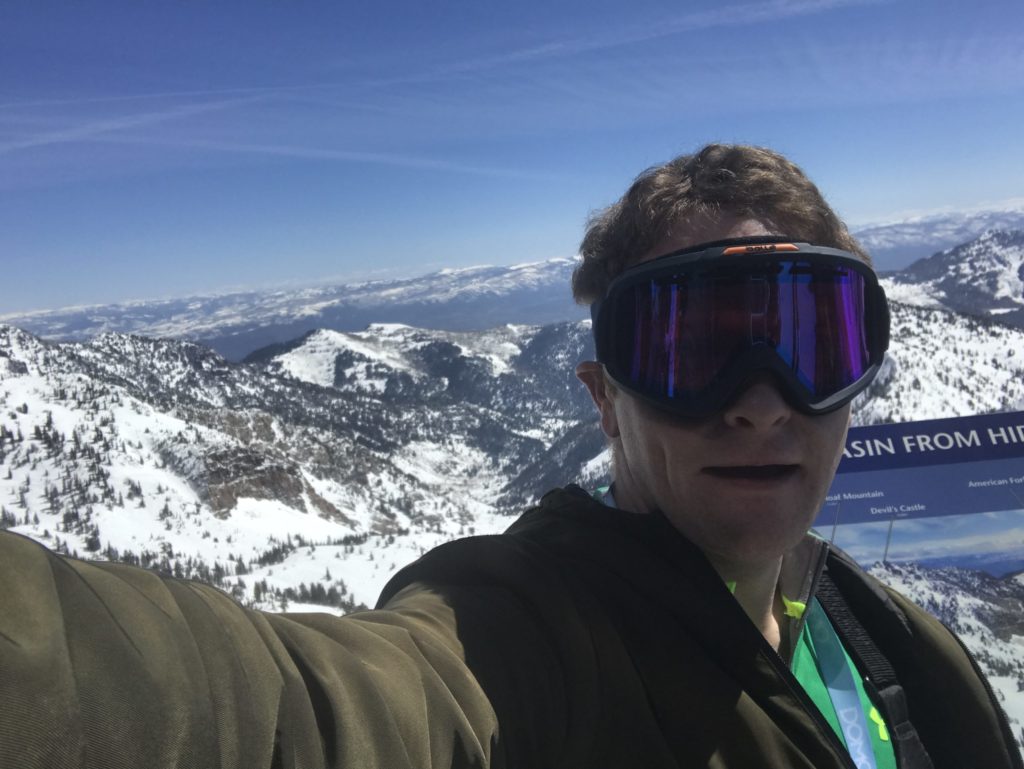 I even skiied Snowbird, which gave me the worst sunburn of my life. I learned in the airport why the conference had conveniently provided sunscreen. This photo is prior to the burn, I will spare you with the after-burn photos. Just know that my face was blistering-red for five days. I ended up using makeup just to look presentable at work on Tuesday – after working from home Monday from embarrassment.

Why brag about going to a business conference? I’m by no-means a veteran. But these things are so sterile, the moral is that any signs-of-life are well received. Take ten minutes to plan some fun ahead of time and you’ll be the hit of the party. 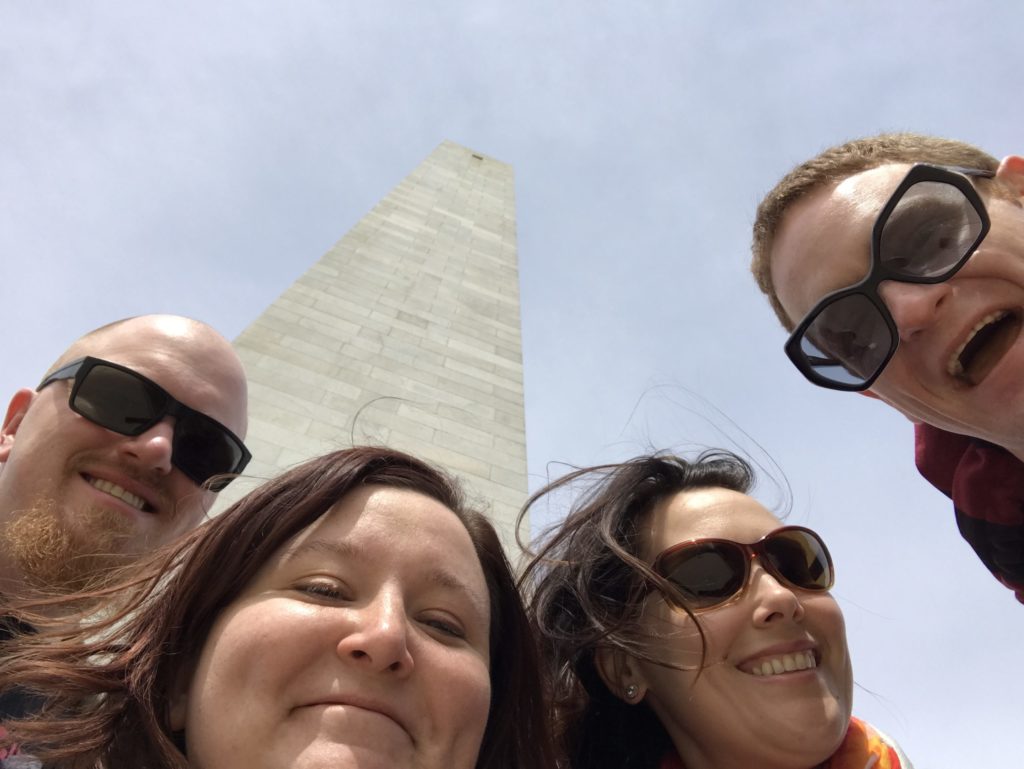 One of my favorite parts of transitioning into my thirties has been semi-financial freedom. Don’t get me wrong, I’m not rich and still feeling my student loans. But now that Alicia and I have a house and a car, there’s some extra saving money for vacations. The hallmark of my thirties thus-far has been determining where to spend it.

My current favorite splurging on vacations with friends. Above, you can see Alicia and I traveling with the Bernses to Boston, then Maine. It was April, so not the warmest climate, but it was awesome. This was our third vacay with the Bernses; easily the best. 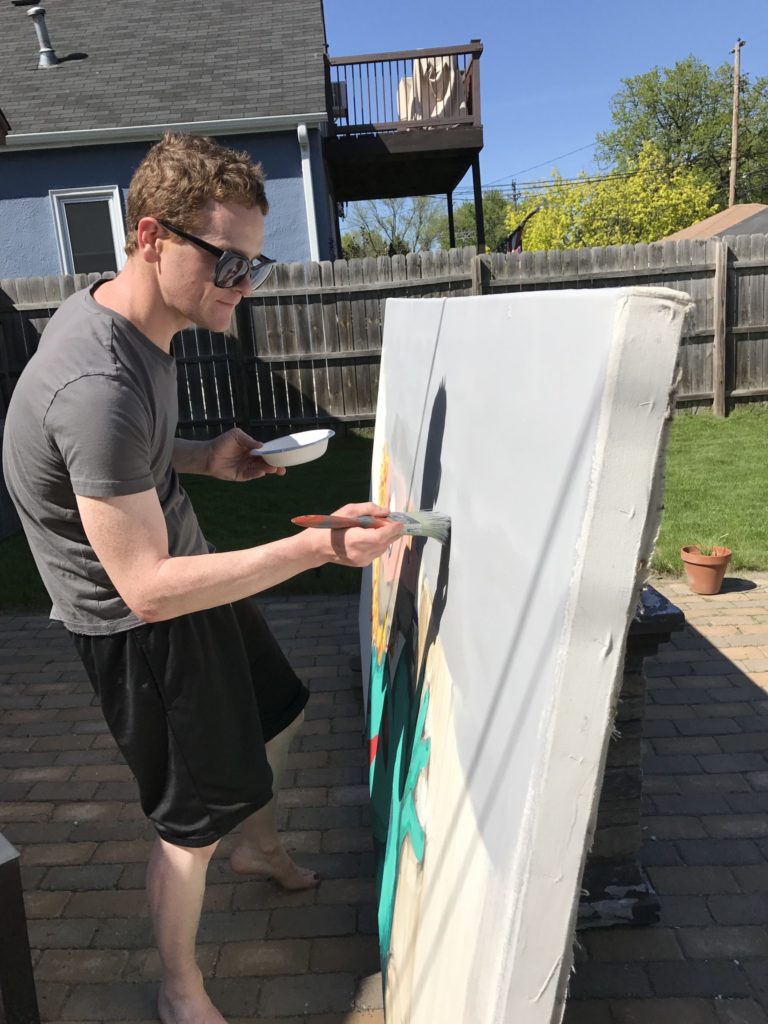 So, here’s the deal. I stuck with STEM in college. But that doesn’t mean I don’t feel things, yo. I have something to express (shut up, I’m being vulnerable and sharing here). So when I was walking home from work and saw this canvas on the street… 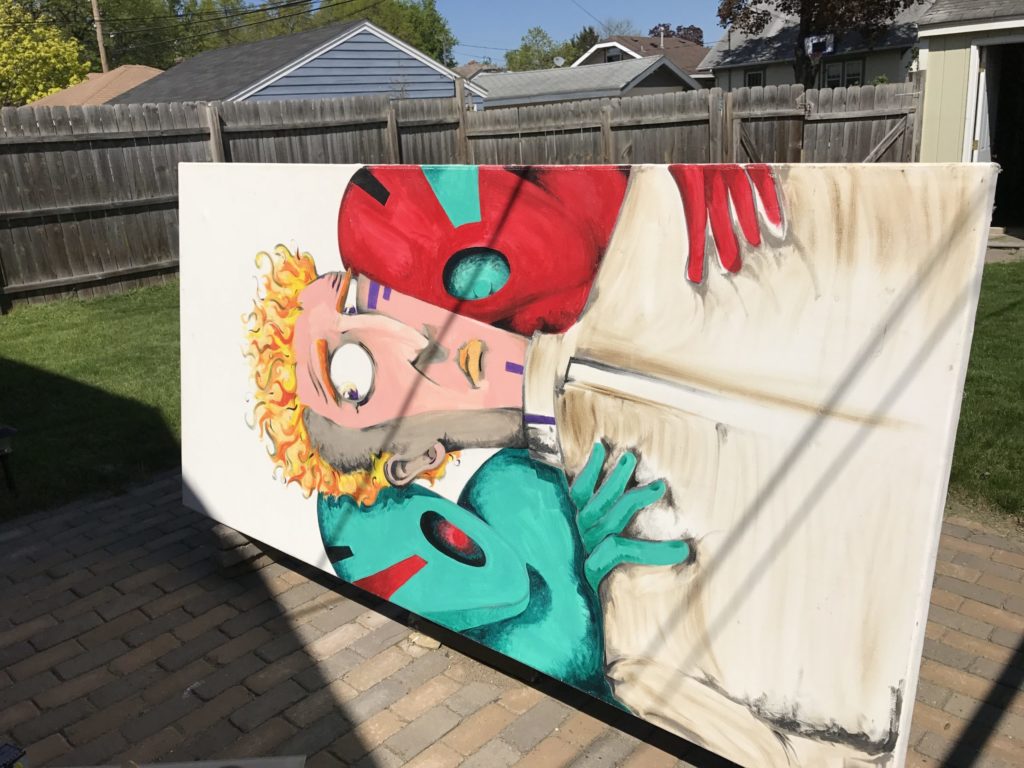 … I told myself I could make something of it. I still don’t know why some artist decided to discard such a huge canvas, but it had a note saying “Free to anyone that will create.”

Me, I’m a fan of minimalist art. I’m not going to create some photo-realist work. I’m not even good enough to create pixel-art yet. But I loved the size of the canvas and thought, “I can draw some lines.” And so I did. I picked some sexy colors, used painter’s tape to make straight lines, then set out to make a masterpiece. After I was done, I let it sit out overnight to dry.

The next morning, the wind decided to destroy my work: 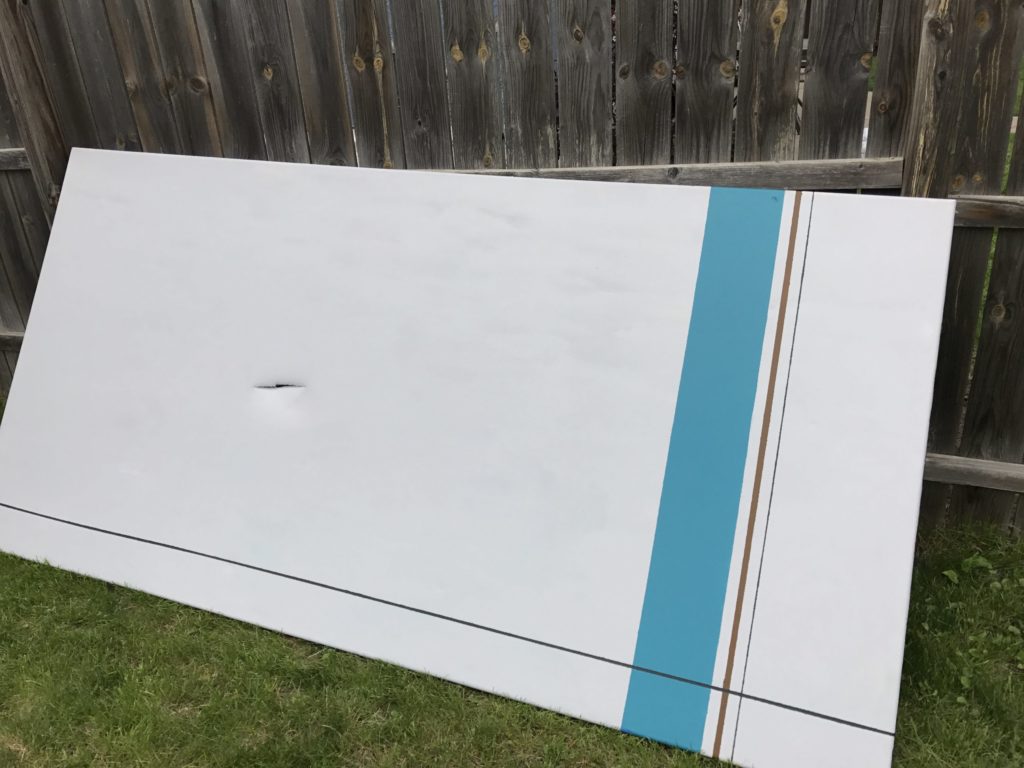 The cut in my new canvas, le sigh

But when life gives you lemons, you make lemonade. The canvas was free, for goodness’ sake. So I cut the canvas in half, right at the tear, and it hangs on my wall to this day. 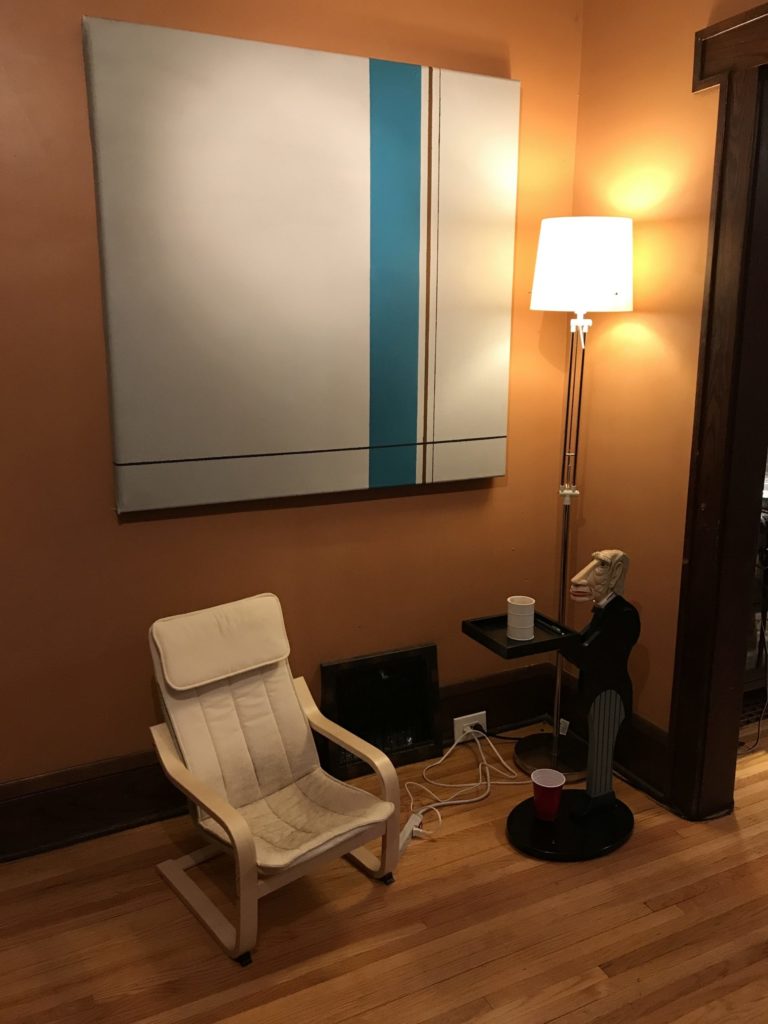 It doesn’t have the same amount of open space as the original, which breaks my heart. But if I’m honest, the original size of this canvas was WAY too big for the wall. The new, smaller size fits much better. And the colors (I think) match the wall. What do you think? Ugly? 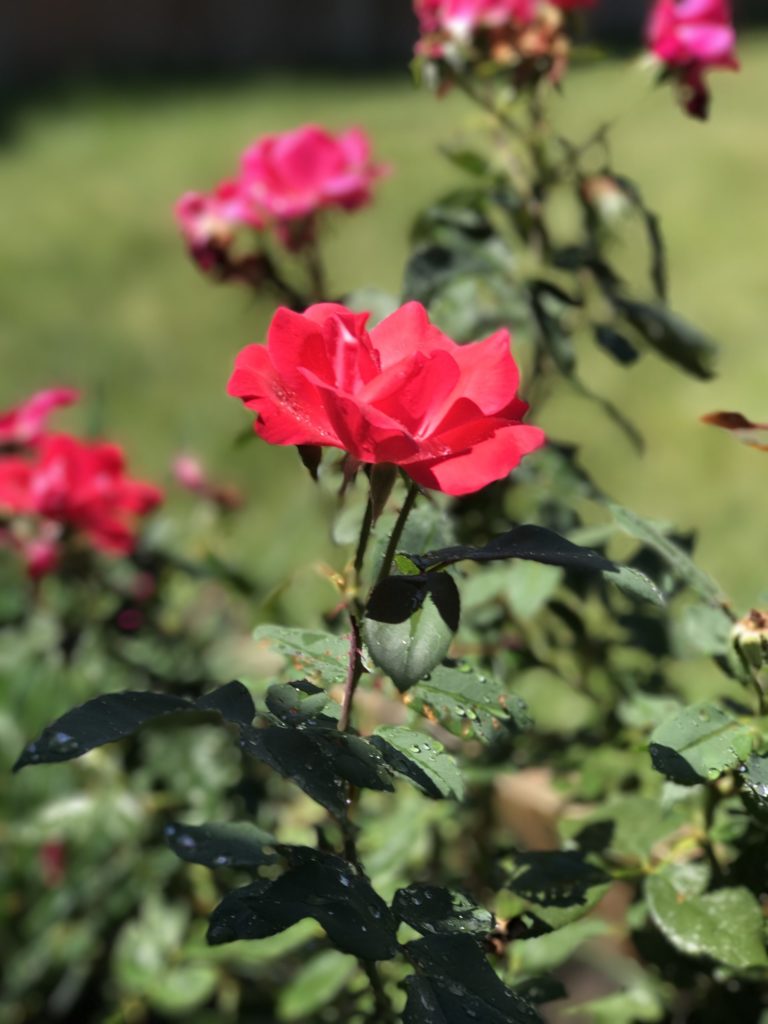 After several years of killing stuff in Alicia’s raised garden-bed, I finally found winners. I planted a rose bush that has just loved me. About once a week, I dead-head it and it’s rewarded me with roses all season. I’ve got the cuts to prove it! …seriously, I thought gardening gloves were stupid fashion statements until I started dealing with rosebush thorns. 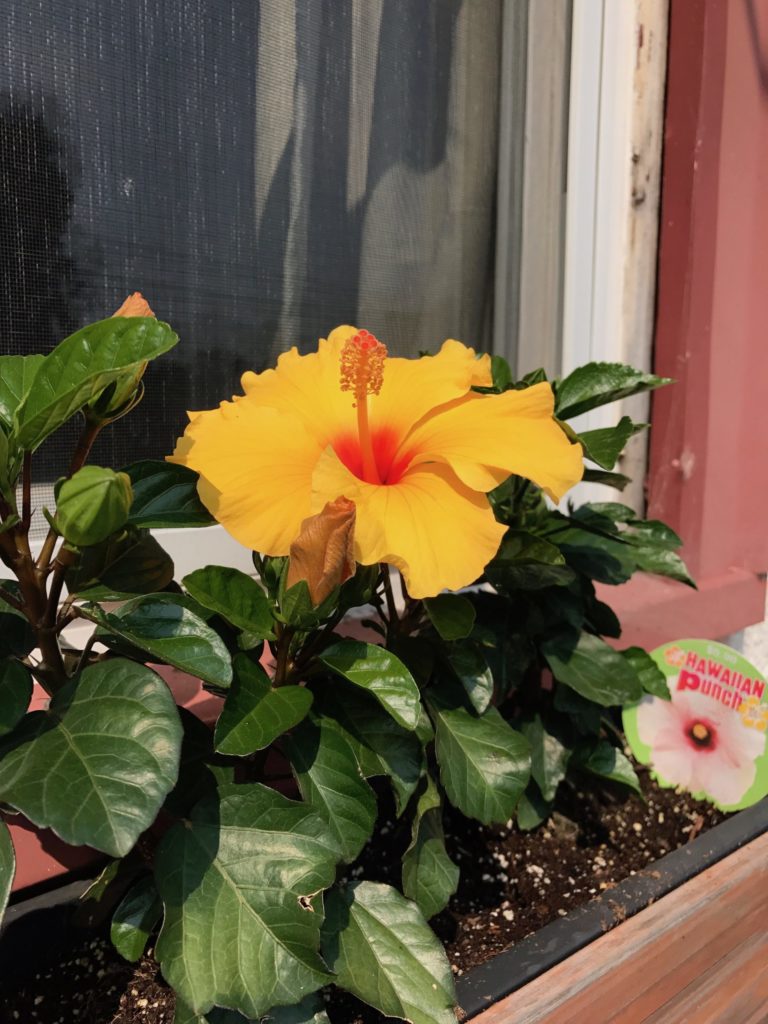 But I’m even prouder of the flower boxes on our windows. In previous years, I’d forget to water these boxes for a few days, then they’d dry out like crazy. From 7am until 2pm, these boxes get crazy sun. So I decided to put some Hawaiian flowers in there and they are thriving! I guess it helps that I water them every day, but let’s just chalk that up to my disciplined thirties-something lifestyle. Next year, I’m going crazy on exotic flowers.

Don’t expect a photo of the eclipse from me, you had to be there to experience it. I wasn’t about to waste my time trying to point my cell-phone at the sun. But we still had fun! 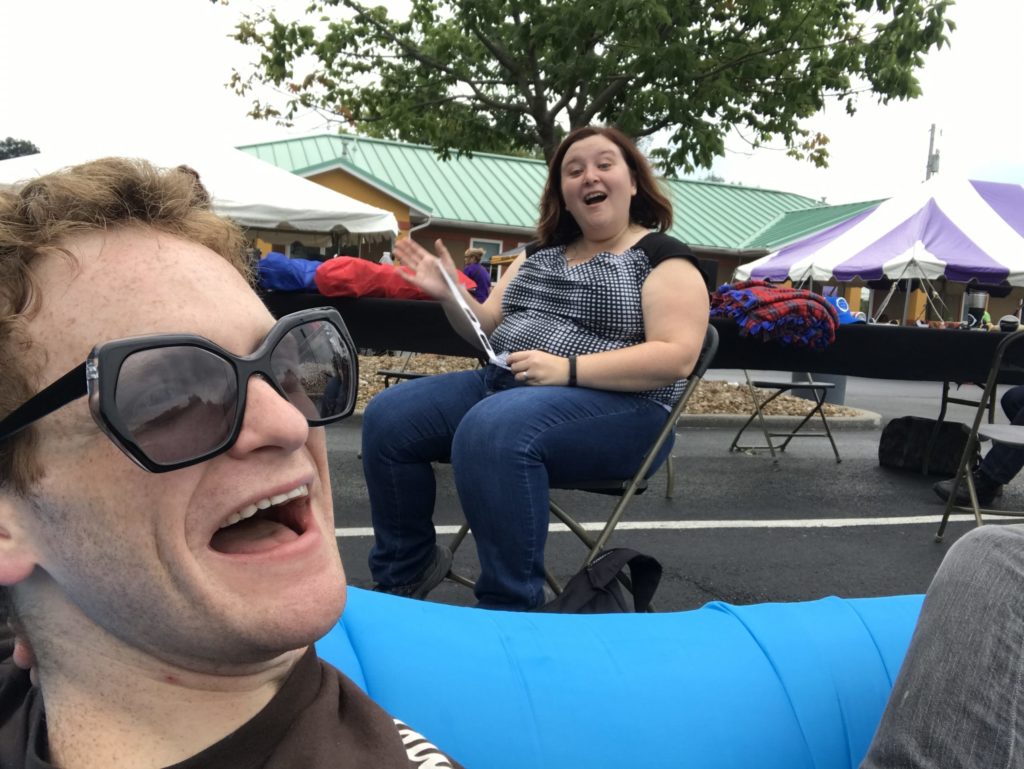 This is Alicia and I (on my pouch-couch) in a casino parking lot in Boonville, Missouri. We managed to find a parking lot with a bar and open backyard-jenga set, then camped out. It was worth it, completely. I won’t attempt to describe it to you, just go see a total eclipse the next chance you get.

Almost as amazing was the drive back. Totality finished at about 1:10pm. We thought we were being conservative by leaving the casino at about 3pm, “just to give traffic a chance to die down.”

You probably know where I’m going with this. We didn’t get home until 1am. It was a six hour drive to get there, it was a ten hour drive to get home. I’ve never seen a busier Highway-35. On the plus side, Mother Nature decided to provide a crazy show that day. 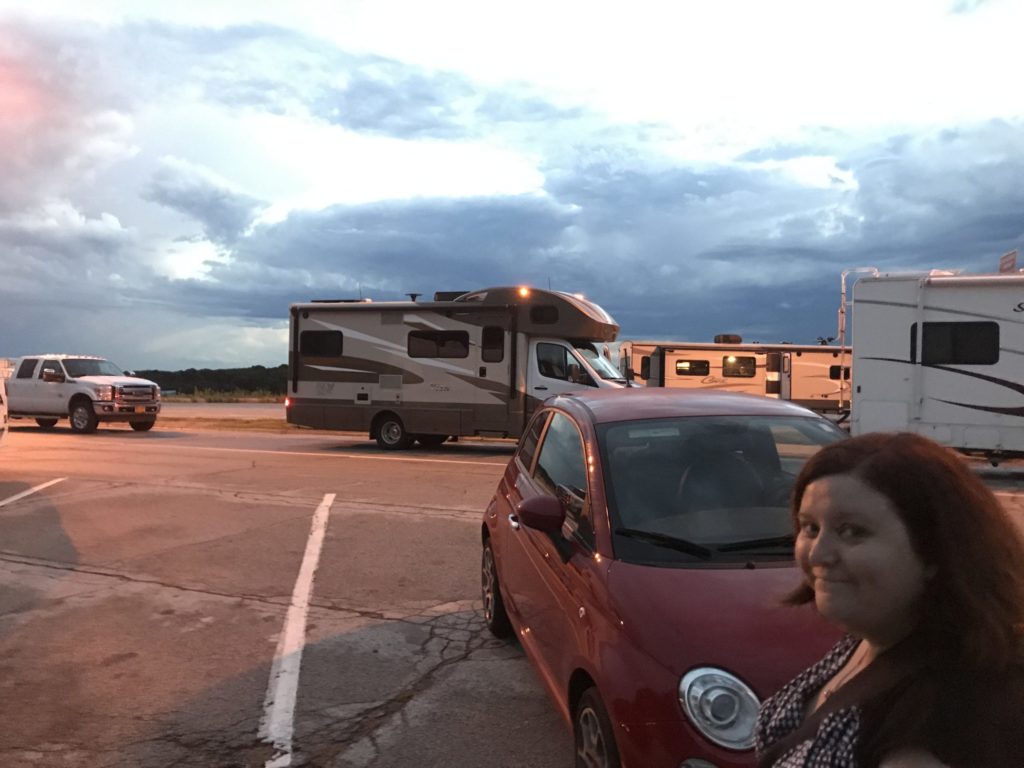 I know the photo won’t do the clouds justice, but it was a breathtaking view at this Iowa rest stop. Also, +1 for Iowa rest stops, they have their game together. 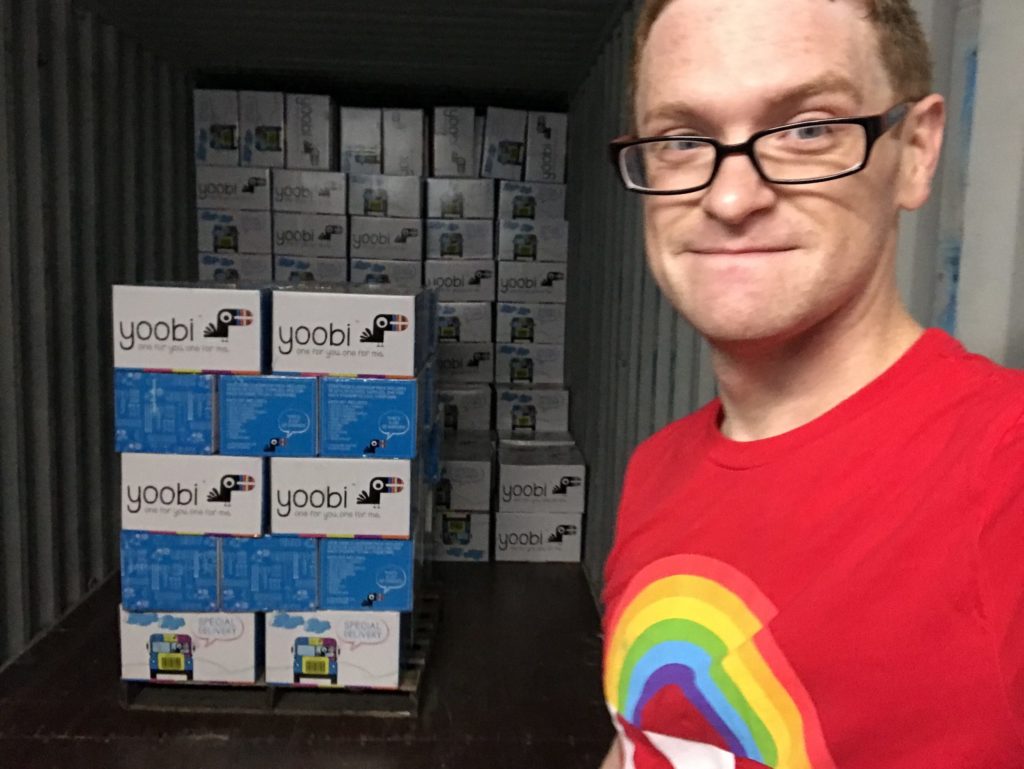 That’s me in a Yoobi truck unloading pallets at the Rooseville Kids in Need location. My Data Science team had a volunteer event to pack backpacks for school kids. 8 of the 10 members of my team packed four pallets of backpacks with school supplies for ready shipping to kids affected by catastrophic events (think Hurricane Harvey). While she was introducing the back-packing process, the coordinator casually mentioned, “By the way, if anyone is willing to lift stuff (no pressure), we have a truck to unload.” And unload I did.

These boxes were only 25lbs each – each was a classroom full of school supplies – but there were hundreds. I was the lightest, so it was my job to step on the boxes and pick up from the top of the truck and hand down to someone to assemble the pallet.

I’d love to complain about how much my arms hurt, but it was great. This was a secular charity that is aiming to make sure kids have everything they need to learn, which is fucking amazing. We’re talking pens, notebook paper, folders. It re-ignited my passion for academia. I haven’t been so proud in a long time. Even better, Yoobi is a huge Target partner, so it made me just-a-tiny-bit-more-proud to work for Target. I couldn’t have more evidence that Yoobi lives up to their promise of “You buy, we give.”

Seriously, I’m not sponsored by either Target nor Yoobi to say this, and this is my own opinion – but they’re totally delivering on their promise. 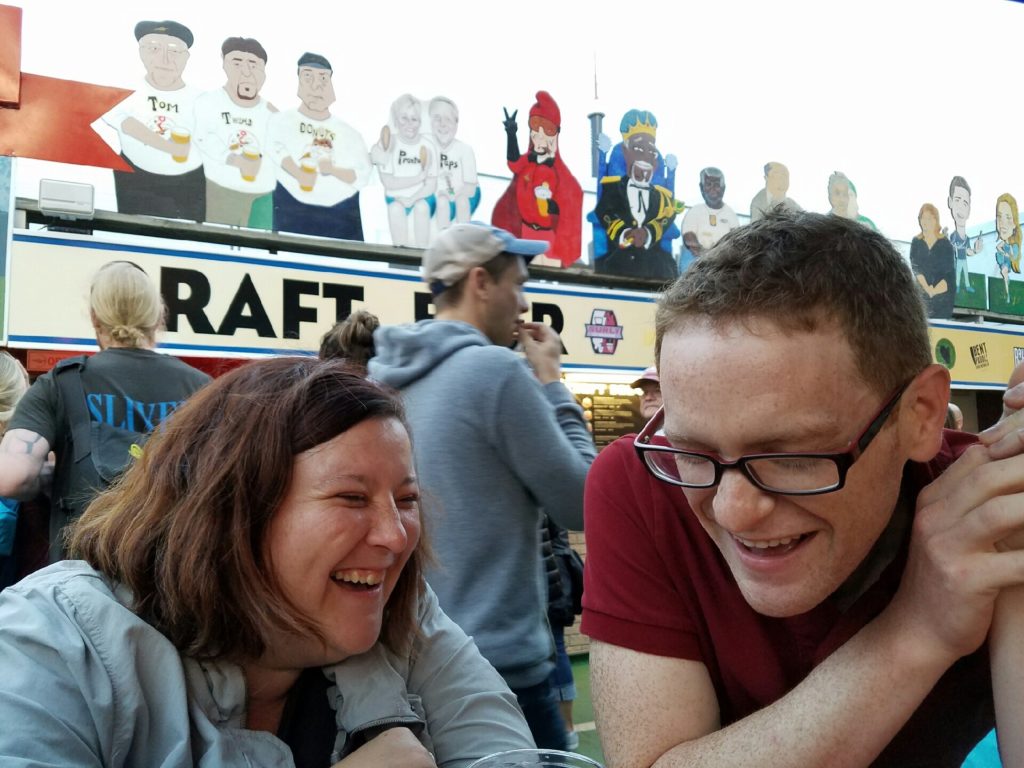 Given my blogging rate, I’ll probably write again in 2018, so take it easy, yo.